If you have receive a poor diagnosis...

There are several conditions which, if diagnosed during pregnancy, can mean that a baby may not live for long after birth, or that he or she might not make it to birth at all. These diagnoses are rare but they can arise for up to 700 babies - about 1% of pregnancies - every year in Ireland. Everyone would feel enormous sympathy for parents faced with a poor or life-limiting diagnosis for their baby. What many parents are not told, however, is that while their children will have a short life, the time they have with them can be hugely joyful and rewarding.. 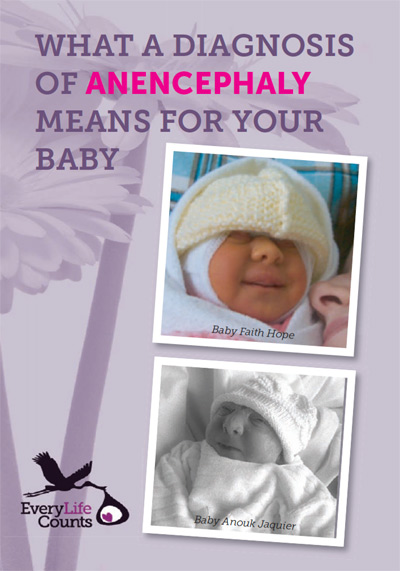 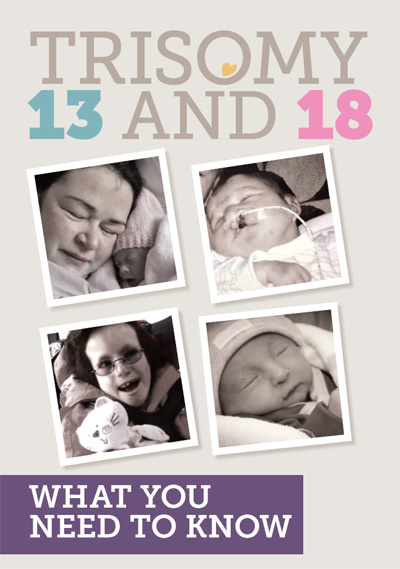 Anencephaly is a serious neural tube defect which causes the baby's brain not to develop properly. A recent study found that 72% of babies with anencephaly lived for a short time after birth. Of those children, 25% lived up to 5 days, while up to 7% lived up to 28 days after birth. (1) Two children - Stephanie Keene and Nicholas - lived in excess of two years. Kildare mother Aileen Behan's little girl Lilly Ann lived for 6 days. She says "I was told that she wouldn’t live after birth, she did for 6 days.  When you’re told you’re going to get nothing, to get 6 days is just a miracle.  There were 2 wishes I had for her, one that she would feel the air in her face and one that she would be held and loved by everyone. And she was."

Trisomy 18 or Edwards Syndrome arises because of the presence of an extra chromosome. There is a significant risk of miscarriage with Trisomy 18. However, contrary to recent reporting, studies have found that the average duration of survival for children with Trisomy 18 was 14.5 days; with 38.6% of babies surviving for more than a month, while 8.4% survived for more than a year (2). Here in Ireland, Elaine Fagan, given just days to live after birth, spent 25 years with her loving family before her death in 2011, confounding all medical expectations. “She has touched so many people. I now know happiness comes from caring and sharing with others. I wouldn’t have found that out if I didn’t have Elaine. It’s thanks to her that I am seeing a lovely side of human nature,” said her father Micheal.

Trisomy 13 or Patau Syndrome also arises when the baby has an additional chromosome. Research has found that children with Trisomy 13 live on average for 7 days after birth, while almost 31% live for more than a month, and almost one in 10 live for more than a year. (3) Kathleen Rose Harkin, who lives in Cavan, has defied all doctors predications to celebrate her seventh birthday despite having Trisomy 13. "They say Trisomy 13 is incompatible with life, but Kathleen Rose is the love of our lives," says her mother Tracy. "She shows us how to love."

In Addition: A recent study in the American Journal of Medical Genetics (2013) found that many parents met with negative reactions from healthcare providers regarding their children who had been diagnosed with Trisomy 13-18.  91% of parents who continued with the pregnancy said they would do that again - and for most of these parents, perinatal hospice care was not available. Our children are not a diagnosis, AJMG, 2013.

Some conditions including Potter's Syndrome, Potter's Sequence and Renal Agenesis mean that a lack of kidneys or kidney development causes a decreased amount of amniotic fluid - which can also mean that the baby's lungs fail to develop. It has tended to be associated with a very poor outcome but this is not invariably so, and a new treatment means the outlook may dramatically improve.

US Congresswoman Jamie Herrera Beutler was told that her daughter had Potter's Syndrome and that "It's 100 per cent fatal. She will either be stillborn, you'll miscarry, or she will suffocate in your arms after she's born".  But the Beutlers urged doctors to try an experimental treatment - injecting a small amount of saline into the womb to act as a substitute amniotic fluid.

Abigail Beutler, was born in July 2013, and is thriving, sitting up, chattering and playing with her adoring parents. She is awaiting a kidney transplant and her Dad, Dan Beutler, is a match. Abigail’s story may now change the treatment protocol for Potter Syndrome. 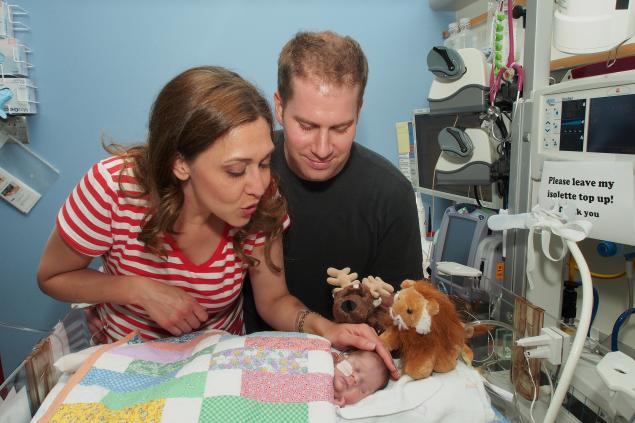 Research shows that when a diagnosis of a life-limiting condition, or a serious disability, is made, up to 90% of babies are aborted. However, studies also show that good support and care specially designed for families where a baby has a life-limiting condition - sometimes described as perinatal hospice care -  can effectively reverse that outcome.

Research by Calhoun et al showed that when this form of care was made available, 85% of the families involved continued to carry their baby, with 61% delivering a live-born child.

Some doctors get it wrong

In September 2014, the Daily Mail reported the story of a baby boy whose mother was strongly advised to abort since he was 'fatally ill’ .

Robyn Wilson and her husband Adam said they were told ultrasounds showed the baby had a chromosomal disorder and that they came under pressure to abort, with doctors in Jessops Hospital in Leeds going so far as to book an abortion and telling the couple that while it wasn't compulsory, it would be for the best.

Robyn said she thought:  ‘What would be worse? Having an abortion, or having the baby in my arms for just a few minutes or days, maybe weeks?’” Wilson said.  “I thought I was never going to get that first hug, his first birthday party or that first day at school – let alone more. I thought it had all been taken away from me before it had even begun.”

Baby Harry was born perfectly healthy.  “The doctors and nurses couldn't believe it,” his mother said. “They all call him ‘the legend baby.’”

WATCH this videos which were recorded at a Perinatal Conference in January 2016. 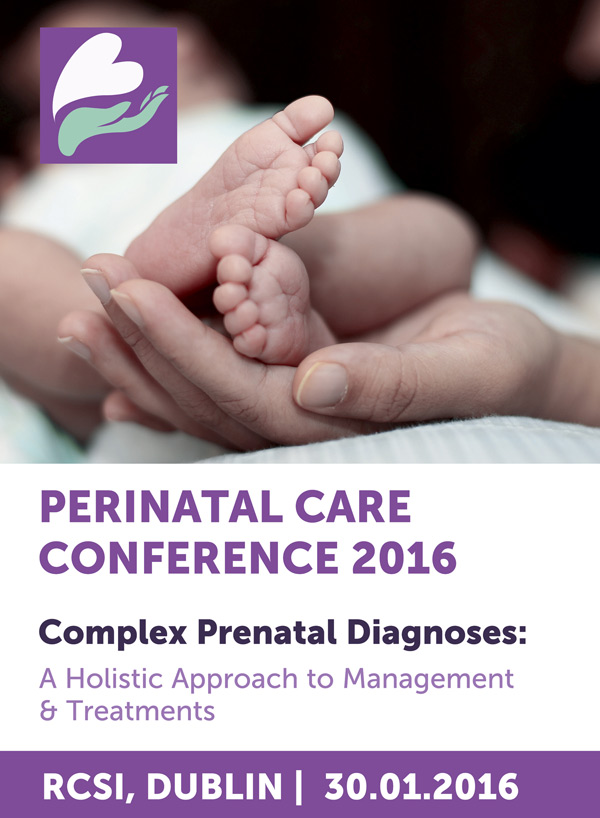 Dr. Martin McCaffrey Is a Professor of Pediatrics at UNC and a Board Certified Neonatologist. He completed his pediatric residency at Naval Medical Center San Diego in 1989.

Paula Kelly is a registered children’s and general nurse. She has a doctorate in Medical Sociology from Queen Mary’s College University of London, and a Masters degree in Anthropology from Brunel University.  As an experienced children’s nurse, the majority of her clinical work has been in the care of children with life-threatening and life-limiting conditions in the home setting.

Barbara Farlow is an engineer with an MBA who was redirected in her life to become a researcher after the death of her daughter Annie ten years ago. Annie had trisomy 13 and the medical care she received when she died at the age of 80 days was deemed by the Coroner's Paediatric Death Review Committee to be "inappropriate."

On April 10, 2014, Jenna and Dan learned that the baby they were expecting had a terminal neural tube birth defect called Anencephaly. They named their baby boy Shane Michael and decided that, although the diagnosis was dire, they would celebrate his life while he was with them in the womb. They created a bucket list of places they wanted to take Shane and in the following months traveled to New York City, Ocean City, Maryland, and the Cape May County Zoo in New Jersey, the Stroudsburg Train in Lancaster, Pennsylvania, the Philadelphia Zoo, and Linvilla Orchards in Aston, Pennsylvania.

Research finds that there are no conditions that be correctly described as 'lethal' since babies have survived with all these conditions, however severe. The use of such terms should not be in counselling, the paper recommends. (British Journal of Obstetrics and Gynaecology 2012)
http://onlinelibrary.wiley.com/doi/10.1111/j.1471-0528.2012.03450.x/full

Study finds 72% of babies with anencephaly are live born

A study of 211 pregnancies shows that 72% of babies with anencephaly were 'live born': of those, with most babies passing within 24 hours, while a small number lived for 6 days or more, with one baby living for 28 days. (British Journal of Obstetrics and Gynaecology 2006)
http://www.ncbi.nlm.nih.gov/pubmed/16827827

Research from Duke University (2015) shows that women who have an abortion after a diagnosis of anencephaly are significantly more likely to suffer depression and despair. There appears to be a psychological benefit to women to continue the pregnancy following a diagnosis of a life-limiting condition. (Prenatal Diagnosis 2015)
http://www.ncbi.nlm.nih.gov/pubmed/25872901

A significant survey of families whose children were born with Trisomy 13 or 18 reports that: (Pediatrics 2012)

Study: approximately 50% of babies with trisomy 18 live longer than 1 week

Ontario study: Children born with trisomy 13 or 18 in, early mortality most common outcome, but 10% to 13% survived for 10 years.

Researchers also noted that among children who underwent surgical interventions, 1-year survival was high. (The Journal of the American Medical Association)

A study looking at all T18 and T13 pregnancies in the region serviced by Cork University Hospital from 2001 to 2012 found that just between 4 and 6% of parents aborted the baby. (BMC Pregnancy and Childbirth)
https://www.ncbi.nlm.nih.gov/pmc/articles/PMC3840564/

Continuing with the pregnancy was also the dominant parental decision

According to this 2010 study published in Prenatal Diagnosis examining cases of anencephaly diagnosed between 2003 and 2009 in tertiary-referral university teaching hospitals in Cork. (Prenatal Diagnosis 2010)

Parents pressured to abort after diagnosis of life-limiting condition

Study in the American Journal of Medical Genetics (2013) entitled: Our children are not a diagnosis: the experience of parents who continue their pregnancy after a prenatal diagnosis of trisomy 13 or 18. 61% of parents reported feeling pressure to terminate (61%) and were told their baby would likely die before birth. One parent reported that "Our first OB refused to continue seeing us if we would not abort. (American Journal of Medical Genetics 2013)

A ground-breaking treatment for Potter's Syndrome/Renal Agenesis, has enabled a baby girl to survive and thrive. Abigail Beutler is the first child with Potter syndrome known to have survived, after her mother received a saline solution injection into her womb during pregnancy, allowing the baby's lungs to develop. Aged three, Abigail has now received a kidney from her Dad and is now doing well. (Obstetrics and Gynecology 2014)
http://www.ncbi.nlm.nih.gov/pubmed/25004316?log$=activity
http://www.people.com/article/jaime-herrera-beutler-abigail-miracle-baby-potter-syndrome-kidney-transplant

Trisomy 13 and 18: Selecting the road previously not taken

An important new paper in the American Journal of Medical Genetics (2016) by Dr Marty McCaffrey spells out that doctors need to rise above their personal prejudices and see the value in the life of a child with Trisomy 13 or 18. He also rejects the 'fatal' and 'incompatible with life' label and says that doctors should be open to interventions which evidence suggests might be helpful. Dr McCaffrey points out that the lives children with Down Syndrome were previously undervalued by the medical community and that doctors should "recall and learn from our down syndrome odyssey". (American Journal of Medical Genetics 2016)

Prolonged survival for babies with Trisomy: time of diagnosis and subsequent interventions are factors

Examination of hopes and experiences of families where baby born with T13 or T18. (American Journal of Medical Genetics 2016)

The authors concluded that not every baby with Trisomy 13 and 18 should be treated in the same way: "interventions may be of benefit to some children and harm others." A diagnosis should not be used to deny medical options which might be beneficial.

Trisomy 13 & 18: life-prolonging treatment should be offered where appropriate

Babies with these conditions used to be described as 'incompatible with life'. But "in the age of social media, however, everything changed.
Parents share stories and videos, showing their happy 4-and 5-year-old children with these conditions. Survival, it turns out, is not as rare as once thought."

Dr Lantos noted that "predictions of lethality become self-fulfilling prophecies" and says that "The concept of quality of life is too vague and subjective to be helpful as a criterion for deciding about the appropriateness of treatment. No one can know with certainty what any infant is thinking, feeling, or experiencing, but what is observed can be interpreted. Children with trisomy 13 and 18 smile and laugh. They are not in pain. They give and receive love. These factors suggest that their subjective quality of life is not so poor that life-prolonging treatment should not be offered."

Journal of the American Medical Association Opinion Editorial by Dr John Lantos, an American pediatrician and a leading expert in medical ethics 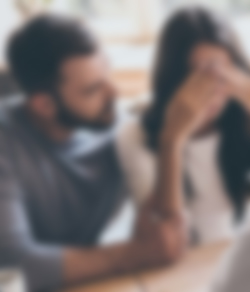 You have received a poor diagnosis...

Bonding with your baby

Talking to your children